Colleen and David, Clemson sweethearts, were set up by another couple (now married as well!) who invited them on a trip down to a Clemson away game. After enduring a road trip together — the true test — Colleen and David became inseparable. The precious pair got married in Charleston, SC a few years later in September of 2009, and the rest is history. Now a family of three, Colleen and David have perfected the art of functioning as a team, and we are their biggest cheerleaders.

We are so excited to celebrate Colleen and David as they renew their vows at The Big Fake Wedding Dallas tomorrow night at The Joule Hotel. We hope to see you there! Tell us a little bit about your story.
We met at Clemson University in 2006 – David’s best friend and his girlfriend (now married) set us up by asking me to join them all on a trip down to Tallahassee Florida for the Clemson/FSU football game. The rest is history… David proposed on January 1, 2009 while visiting me in Dallas. We were married in Charleston, SC (where David is from) on September 26, 2009. What was the absolute best memory from your wedding day?
The best part of our wedding day was waiting to see each other until I walked down the aisle. We took a picture holding hands prior to the ceremony with a door separating us, which made the anticipation of seeing each other even greater! What is the best date you have ever had?
Our best date was a spontaneous weekend trip we took to Vancouver Canada one August. We took the gondola up the mountain and saw the most beautiful scenery and wildlife. We were able to eat and drink at the top of the mountain and also go snow tubing! It was such a fun day spent together exploring a beautiful new place! 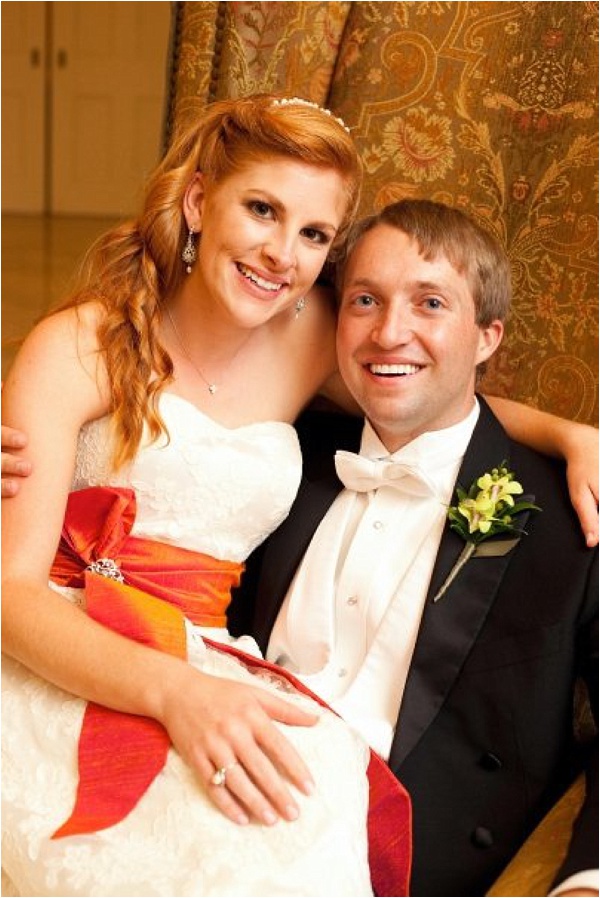 What is the most awesome thing about your marriage?
The most awesome thing about our marriage is how well we function as a team. We share duties around the house and balance each other out in ways we didn’t know we would need when we got married. Now that we have Carter (our 9 month old son), this has become especially important. Thankfully, we are on the same page with what we want out of our lives as a couple and as parents.

The Big Fake Wedding Dallas is now officially SOLD OUT! If you missed out on this event, we invite you to join us when we return to Dallas in September — grab your ticket here.